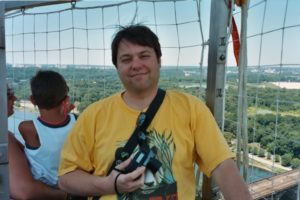 Jon was into photography at least since the 80’s. His approach to photography was to document sights seen, places traveled to, and especially time spent with friends. He shot a fair bit of video as well, particularly in the late 90’s through mid-2000’s.

Jon was quite a technology enthusiast. He ran his own website, PandaGuy.com, out of his house, on a dedicated business-class DSL line. He was an early adopter of digital photography, using it starting in mid-1997. He also used PDA‘s, the predecessor to smartphones, since the 90’s.