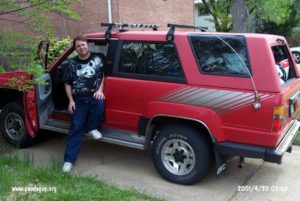 Jon started off as a CB’er, then became an amateur radio operator. He earned an Advanced license, which required passing a 13 words-per-minute Morse code test.

He was most active in amateur radio in the 80’s and 90’s, but still used it during the 2000’s. He was known to most by his original systemic callsign, KA3OVK, though he changed to vanity call N4FUR in August 2011.

Jon operated in nearly every popular mode and band. On HF, he operated both Morse and SSB (voice). He had quite an ear and could pick out both from static even when I couldn’t make out a thing! His antenna setups allowed him to operate nearly all bands, but he usually had 20m going when I was around, since there were always contacts to be had there. He particularly liked listening in on the Maritime Mobile Service Net.

Jon particularly enjoyed operating HF mobile, both on-the-go and stationary, looking for a good spot to operate from at night. He often referred to his SUV as a porcupine, due to all the antennas on it. At home, he had a pretty complete HF setup as well, and did contesting from time to time.

On VHF, Jon enjoyed doing weak-signal work from home. He wasn’t big on repeaters, but he was deeply into digital modes. He ran a UUCP node throughout the 90’s, and an APRS node through the early 2000’s.

Jon also enjoyed shortwave listening and scanning. I have quite a few memories of him listening to the Montgomery Country Fire and Rescue Service and filling me in on what was going on in the area.

Do you have any memories of Jon on the air? Leave a comment below.